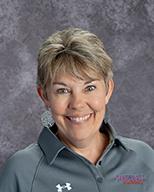 Mrs. Blakeley is a graduate of Mount Vernon High School and attended James Madison University where she earned her Bachelors degree in Marketing Education. She earned her Masters degree in Counseling and Human Services at Indiana University. Mrs. Blakeley taught in alternative schools in northern Indiana before moving into a school counselor role there. She and her family moved back to Fairfax County in 2002. She spent 5 years as a counselor here at Marshall HS and became Director of Student Services in July 2007. Mrs. Blakeley misses the individual interaction with students but enjoys being part of the administration team. In addition, she feels particularly lucky to lead such a terrific staff of school counselors. Mrs. Blakeley has four children and she and her husband are enthusiastic supporters of the Statesmen.